I've been thinking about the gathering of the family at your home in a few weeks, looking forward to seeing many of us together around your Thanksgiving table.  And eating the pumpkin pie, of course: a tradition passed down from your great-grandmother (my grandmother) and before -- those hard-working constantly-cooking Ohio women. Some of these musings have been inspired by two books about family traditions by Patricia Polacco.  She's updated her classic The Keeping Quilt on its 25th anniversary, and written a new family tale, The Blessing Cup.

The Keeping Quilt starts with Polacco's great-grandmother Anna arriving in New York as a child more than 100 years ago.


The only things she had left of backhome Russia were her dress and babushka she liked to throw up into the air when she was dancing.

When Anna grows bigger, her mother makes the dress, babushka and other clothes from the old country into a quilt.  "It will be like having the family in backhome Russia dance around us at night," she says.  The quilt is used to wrap babies, cover celebratory tables, make wedding huppas, and for generations of children's play. 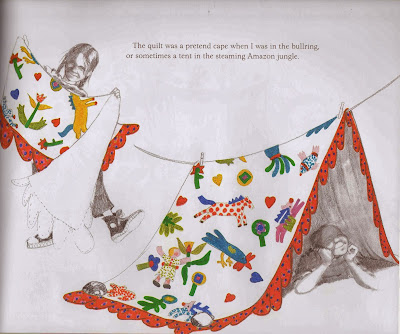 One wonders how the quilt survived the babies, the birthday parties, weeping relatives at deathbeds, not to mention energetic make-believe.  It seems to have, and in the new book Polacco describes how she's taken it with her to schools and other book talks for the past 25 years.  It finally shows its age -- the white parts of the quilt in the illustrations turn to brown -- and her children surprise her with a meticulously-researched, lovingly sewn copy of the quilt.  The original now hangs in a museum in Ohio.

The loveliest part of the revised book, though, is Polacco's addition of both of her children's weddings, under the original quilt huppa.  One wedding is straight; the other is gay: 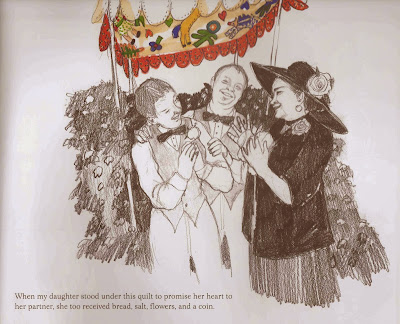 Sometimes I think multi-generational picture books don't quite engage kids.  But this one is so full of babies and parties and family gatherings that it can really resonate with a young reader.

The Blessing Cup, a new addition to Polacco's many stories of her family history, tells how Anna came to the U.S.  It starts in a shtetl , with young Anna and her mother hiding in a goat barn during a pogrom.  One of the family's prize possessions is an elaborate tea set given by an aunt.  "Anyone who drinks from it," she wrote, "Has a blessing from God.  They will never know a day of hunger.   Their lives will always have flavor.  They will know love and joy . . . and they will never be poor!"  The family rejoices in the richness of having each other. 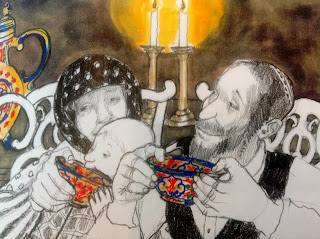 Later, Jews are expelled from Russia and the family begins a long trek to the coast where they hope to find passage to America. Anna's father collapses from exhaustion and the family is taken in by a friendly doctor who cares for all of them for months.  When soldiers demand that the family leave, the doctor sells one of his prized possessions to pay for their safe passage to America.  They bid each other farewell over hot tea in the tea set. The family leaves all but one cup of the tea set behind, conferring its blessings on the doctor: "We kept one cup so that we can still have its blessing among the four of us.  It is all that we will need."  The cup, like the quilt, symbolizes the blessings conferred by a strong and loving family.

The story fast-forwards through the cup being handed to the family brides under the quilt huppa -- and a sad but sweet denouement during the 1989 San Francisco earthquake.

So this all brings me back to impending holidays, family gatherings, the stories we all tell each other about the ancestors we never met, and the feelings that get wrapped up in the traditions. I can't wait to see your brood, to be one of the old folks telling stories of generations past, and to have some of grandma's amazing pumpkin pie.

Deborah
Posted by Deborah at 10:26 PM

Email ThisBlogThis!Share to TwitterShare to FacebookShare to Pinterest
Labels: Polacco