I'll confess that in addition to liking John Green's books, I occasionally go through flurries of watching the Nerdfighters video blog.  The combination of smart, occasionally outraged and often absurdist speed-talking can keep you coming back.

Here's the story of a community from a pre-digital era:
Andrew Henry's Meadow, by Doris Burn.  Published in 1965, it was brought back from out-of-print status this summer.  The illustrations feel very Robert McCloskey-ish.  It's a book about a group of young people who, like the Nerdfighters, feel apart from the mainstream.  Andrew Henry, middle child of five, "liked to build things."  He makes a series of Rube Goldberg-ish contraptions, all of which irritate different members of his family: 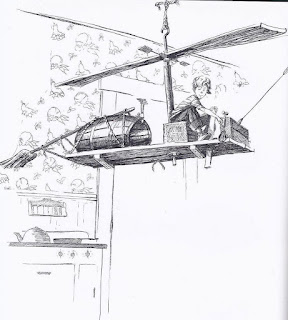 Mrs. Thatcher was unhappy when Andrew Henry built a helicopter in the kitchen.
The helicopter had many fine features.  Nevertheless, she said to him firmly, "Andrew Henry, I have work to do.  You must take that thing out of the kitchen."


His father is annoyed at an eagle's cage in the living room, his sisters are upset when he hooks up a merry-go-round to their sewing machine, and on it goes.  So one day he packs up his tools and leaves home, walking through woods and swamps until he finds a meadow, where he builds himself a house and is content.

Alice Burdock, carrying birdhouses and cages and sporting a dress arrives.  She loves birds, but her father hates them, so she asks Andrew Henry to build her a house, which he does: 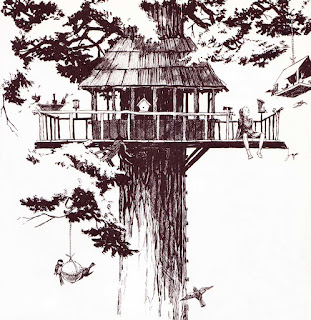 It was a nice house, especially for a person who liked birds.

Next is a boy with fishing rods and boats: Andrew Henry builds a bridge, then builds a house on the bridge.  A boy with mostly rodent-y pets gets an underground house, and a tuba-playing girl gets a teepee with an igloo-style tunnel entrance because "she needed privacy for her music."  Soon there are nine children, each with a house in Andrew Henry's meadow. 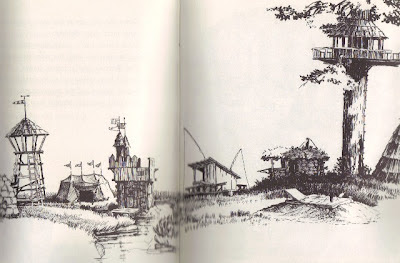 Parents finally notice, there are four frantic days of searching, followed by discovery and rejoicing:


The fathers and mothers were too happy to scold or ask any questions.  Their children were safe.

The runaways are ready to go home, and all is happy.  Andrew Henry's family -- like Spinky's -- appears to have learned its lesson and he is given a basement workroom and much encouragement for his projects.