Back to the beat

Doonesbury: what a great idea.

I know I did an about-face in my last post: from jazz and rhythm for toddlers to war for pre-teens.  Sorry about that (to use a Vietnam War-coined phrase).  So now that I've scanned a few pictures from music books into my computer, I'll lurch back to little ones and music.

You hit the two of the best books on rhythm, so I want to move on to more classical fare.  Starting with the delightfully illustrated
Zin! Zin! a Violin by Lloyd Moss. It introduces ten instruments, one page at a time, starting with the trombone:


With mournful moan and silken tone,

Itself along comes ONE TROMBONE.

ONE TROMBONE is playing SOLO.

I can imagine your household, with your talent for accents and singing.  Next, the trumpet, giving the enthusiastic feel of Marjorie Priceman's pictures: 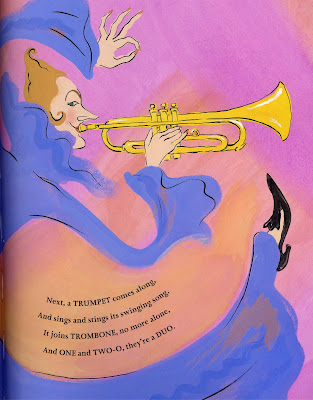 It goes on through cello, harp, clarinet and more.  Then they file onto a stage, and play:

The STRINGS all soar, the REEDS implore,

The BRASSES roar with notes galore.

It's music that we all adore.

It's what we go to concerts for.

A happy line of hand-holding cats, dog, and a mouse boogie across the bottom of the page.

And speaking of concerts, I'm ending with my favorite book for young concert-goers:

The Philharmonic Gets Dressed

by Karla Kuskin.  It fits into the tradition of Ramona wondering about Mike Mulligan going to the bathroom.  In this one, we follow the getting-ready rituals of many of the 105 members of an orchestra:


First they get washed.  There are ninety-two men and thirteen women.  Many take showers.  A few take baths.  Two men and three women run bubblebaths, and one man reads in the tub while the cat watches. One woman sits in the bubbles and sings.

They dry off, put on underwear (boxers and briefs for the men, and an array of early '80s underwear for the women), each step with Marc Simont's  illustrations of six or more people, each doing things slightly differently: 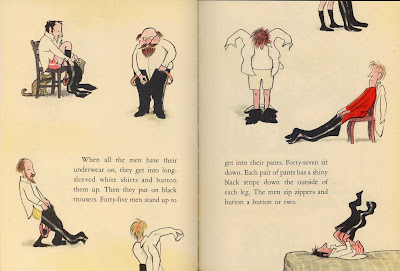 There are ties and overcoats and saying goodbye and getting transportation to the concert hall.  The book ends with "the man with the black and white wavy hair" (we've been following him too) stepping onto the podium, raising his baton, and starting the music.

What I love about this book is that it takes seriously all those little steps which can dominate parts of the day for small children, and which adults tend not to mention much (see Miss Binney, in Ramona quote referenced above).  And it turns a somewhat confusing crowd of grown-ups into people who put on their pants (mostly) one leg at a time.

Love,
Deborah
Posted by Deborah at 9:50 AM